For well over a century and a half, The Martin Guitar Company has been continuously producing acoustic instruments that are acknowledged to be the finest in the world.

In spite of the many changes throughout its colorful history, C. F. Martin has never veered away from its initial commitment to quality. The concern for producing the finest instruments possible in 1833 is especially evident today at Martin's expanded facility in Nazareth, Pennsylvania. 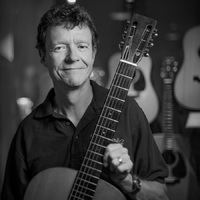 From workshop to factory

The early Martin guitars were totally hand-crafted products, made on a one-by-one basis, and there was little standardization. Back in the early days, Martin guitars were characterized by a headstock that had all the tuning keys on one side, which was soon discontinued by Martin and went unused until Leo Fender resurrected the design in 1948 with his Telecaster guitar.

Throughout their rich history, Martin introduced innovations that would change the American guitar industry forever. Back in the 1850s they started using X-bracing, which is still in use today on all steel-string Martin guitars. The bracing system is largely responsible for the distinctive Martin tone.

The 14-fret neck was developed in late 1929. Prior to the period, guitars were generally equipped with a 12-fret neck. It was so well received that Martin eventually extended the feature to all models in its line. In short order, it became the standard design for the American guitar industry.

The Dreadnought guitar, named after a large class of World War I British battleships, has become something of a trademark of the Martin Company. At first the instruments were not very well received, however, as folk singing became increasingly popular, sales of the Dreadnought picked up and made it the most popular and copied shape of acoustic guitar of all time.